How to Identify, Cure, and prevent Root Rot- For Good

Green Thumb Revival may earn a commission for purchases made after clicking links on this page. Learn More.

Root rot is a severe root disease that affects plants, particularly those planted in containers. When plants are overwatered or there is inadequate drainage, soggy soil can promote the growth of soil-borne fungus, which swiftly spreads to the roots and kills the plants.

The ideal management strategy is prevention, which involves ensuring that the root zone drains easily and that plants are not overwatered.

Although treatment is feasible, if symptoms manifest in sections of the plant above the soil surface, it may be too late to reverse the harm already done.

What is root rot?

Root rot, in the simplest terms, is the decay and rot of plant roots caused by a lack of oxygen in the growth medium. As with people, roots choke and drown when submerged in water with insufficient oxygen.

Root rots affect the majority of plants, including both woody and herbaceous ornamentals. Root rots can be chronic illnesses or, more often, acute diseases that cause the plant to die.

Low oxygen levels also encourage the growth and reproduction of soil-borne fungus such as Pythium, Phytophthora, Rhizoctonia, Botrytis, Alternaria, and Fusarium. Once colonies begin to form, they infect the plants by infecting the weaker roots.

After infection, the roots begin to die, unable to absorb necessary oxygen, water, and nutrients, and the plant soon dies.

When root rot manifests in plants, it is sometimes misdiagnosed as another condition due to the symptoms it presents and their resemblance to those of other plant diseases.

The second myth occurs when homeowners believe the symptoms their plant is exhibiting are caused by nutrient shortage.

If the soil feels moist to the touch, the plant receives adequate sunshine, and there are no visible symptoms of insect infestations, people assume the plant is deficient in nutrients.

This, once again, is where the issue arises. Many people who grow houseplants indoors feed them with water-soluble fertilizers, which are diluted in water and added to the soil.

Thus, they prepare a batch and administer a generous amount to their plants. This supplies additional water to an already saturated growth medium, exacerbating the problem of root rot.

People are prone to believe their plants are thirsty when, in fact, they are being overwatered. The visual signs of water stress – whether excessive or insufficient – are identical, particularly because leaves tend to droop in both situations.

This is where one of the most serious issues arises.

The notion that wilt equals drowning leads people to overwater their houseplants, aggravating the problem of too much water and insufficient oxygen in the root zone rather than resolving it.

Where does root rot come from?

Due to the wide host range of these fungi, they can induce root rots on a wide variety of plants.

The majority of root rot fungi prefer moist soil conditions, and some, such as Pythium and Phytophthora, generate spores that may persist in soil or plant debris for long periods of time.

What are the symptoms of root rot?

The difficulty with root rot is that it frequently goes undetected since it develops in the plant’s roots system, below the soil surface and out of sight. Once the illness is discovered in the leaves, it is generally rather serious.

One of the first visible signs of root rot is browning and mushiness of the plant roots, as opposed to their healthy firm, white nature with numerous feeder roots.

As root rot progresses, leaves yellow, wilt, or droop, and eventually become mushy. Once symptoms are apparent in the leaves, the issue may have progressed beyond repair, posing a threat to the entire plant.

Yellowing, browning, and dieback of the leaves, browning or blackening of the crown and the roots, and poor growth are all symptoms of root rots/crown rots.

Both of these conditions may potentially result in withering.

In extreme cases, when conditions are ideal, such as cool temperatures and saturated soil, root rot can quickly kill the rest of the plant.

Root rot induced by fungal infection are most frequently caused by the following:

Stunts, yellows, and wilts plants even when the potting material is adequately wet. Brown to black roots that are soft or mushy. The root’s outer part may be readily separated from the core, leaving a thin hair-like thread.

Frequently, when a plant is removed from the potting media, the majority of the root system remains in the container.

Causes darkening of root tips and fast softening and mushiness. Often, plants will wilt even though the potting material has an appropriate amount of moisture.

Additionally, this disease can cause the bottom parts of stems to become black, brown, or mushy, resulting in lower leaf yellowing and dropping.

Occurs when temperatures are high and the environment is wet. The fungus develops as coarse reddish brown threads on the surface of infected stems and roots, frequently mimicking spider webs.

Roots and lower sections of stems that are diseased will turn brown and collapse. Rhizoctonia will infect plant foliage and cause it to turn brown and matted together in perfect conditions for infection.

Regrettably, root rot may be transmitted from plant to plant. The fungal spores are aerosolized and can also be spread by insects and soiled gardening implements.

Due to their close proximity, higher air circulation outside, and insects moving from plant to plant, garden plants are more sensitive to spore transmission.

Although container plants cultivated inside transmit the root disease less frequently, it still occurs, especially if all of your plants are overwatered.

What are the causes of root rot?

Root rot is caused by a number of factors, all of which are interconnected.

Root rot and other root diseases are initiated when plants are overwatered and their roots become ensconced in waterlogged, wet soil.

When the growing substrate is consistently overwatered, water fills all of the pore spaces in the growing medium, suffocating the organism. Without oxygen, or when oxygen levels in the soil are low, physical processes such as nutrient and water uptake, as well as plant respiration, all come to a halt, to the plant’s detriment.

When the root zone has an adequate balance of water and oxygen, their numbers remain low, posing little threat to the roots.

They proliferate, however, when water levels rise dramatically, causing oxygen levels to fall, especially during the cooler winter months, and quickly wreak havoc on plants.

How to treat root rot 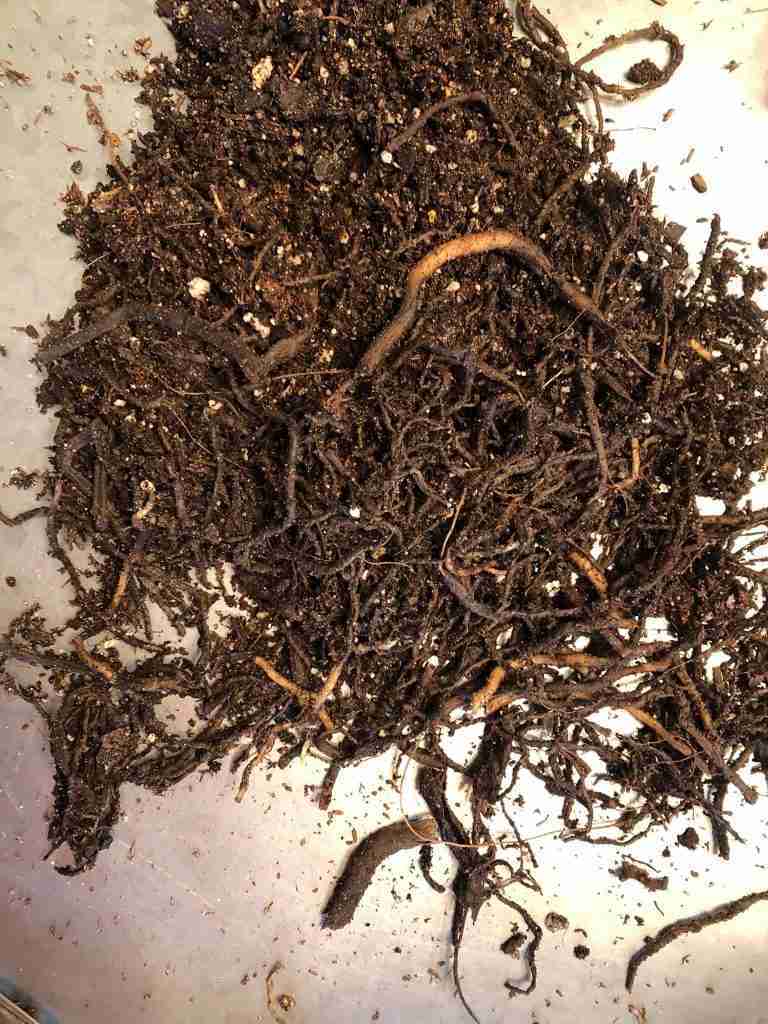 Root rot disease is most effectively treated by transplanting the damaged plant in new soil.

Remove as much contaminated dirt as possible from the roots by gently shaking it away, and then repot the plant in fresh, clean potting soil.

To assist avoid reinfection, you can apply a root treatment containing beneficial mycorrhizal species or sprinkle the healthy roots with sulfur powder or cinnamon – a natural fungicide.

Beneficial mycorrhizae operate by creating an unfavorable habitat for pathogenic bacteria and fungi, preventing them from infecting your plants. Sulfur operates by acidifying the soil, reducing the availability of some nutrients and therefore restricting the pathogen’s feeding source.

Cut away the roots

If root rot has spread widely, the safest course of action may be to remove the most of the root system of the plant and begin again.

You can attempt to dissect the diseased plant using sterilized cutting tools, retaining only healthy sections and replanting them in new soil. 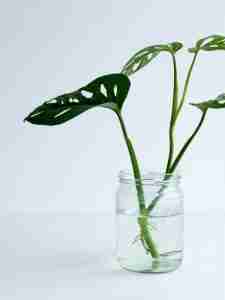 If the entire root system is damaged, attempt to establish a new plant by taking stem or leaf cuttings from the healthy leaves.

How can I prevent root rot?

Without a question, one of the most effective strategies is understanding how to avoid root rot and working diligently to prevent the problem rather than having to hastily cure it if it occurs.

Good drainage is the best way to prevent root rot and maintaining an adequate water-to-oxygen ratio in the root zone.

Utilize the proper growth medium for your plant kind. Never use ordinary garden soil in containers for plants. It compacts readily in containers, sucking all of the oxygen from the root zone’s pore space. If your plants are more prone to root rot, use a growth medium that has a larger proportion of coconut coir, vermiculite, or to aid with drainage.

Ascertain that the bottoms of your containers have drainage holes. If your pot is missing them, you may be able to replace them with a cordless power drill. Simply ensure that you use the proper drill bit.

While plastic and metal containers are straightforward to deal with, terra cotta and clay pots can fracture if not drilled with a bit.

Occasionally, it is important to utilize a container that does not have any drainage holes and cannot be fitted with any.

You’ll want to construct a cachepot in this scenario to allow for drainage. Pot the plant in a container with a little smaller diameter than the non-draining container.

Put something heavy on the bottom of the larger container, such as stones, and then place the smaller container within.

This gap between the bottoms of the two containers provides for drainage from the smaller container into the bigger.

Contrary to popular belief, do not coat the bottom of your container with rocks or pebbles to form a drainage layer. According to research, this actually hinders drainage rather than facilitating it.

Water flows downhill through the soil due to gravity, but comes to a halt when it comes into contact with a layer of pebbles or tiny tones. Water must percolate through the whole potting mix before it can percolate into the “drainage” layer, rendering the layer troublesome rather than beneficial.

If you have a saucer or other catch basin beneath the container to collect extra water as it drains, dump it after each watering session. Never allow your plant to remain submerged in this standing water.

Finally, the most critical component of preventive is to properly water your plants. This implies allowing the top of the growth material to dry up completely before watering the plant again.

This is particularly critical during the colder winter months, when the plant is dormant and development has halted.

How can I prevent root rot in leca?

You’re probably wondering how plants can thrive in leca or other semihydo or even full hydroponic systems, where the roots may exist entirely in water and without soil, without succumbing to root rot.

The fact is that root rot is still a concern with hydroponically produced plants and must be closely monitored.

Hydroponics systems are based on feeding nutrient solutions to the plants, which results in an almost continuous flow of water through the root zone of the plants. This movement contributes to the solution’s oxygenation, supplying oxygen to the roots.

When water becomes stagnant and the oxygen content is low, plants might develop root rot similar to those grown in soil.

Root rot is a severe root disease that affects plants, particularly those planted in containers. When plants are overwatered or there is inadequate drainage, soggy soil can promote the growth of soil-borne fungus, which swiftly spreads to the roots and kills the plants.

The ideal management strategy is prevention, which involves ensuring that the root zone drains easily and that plants are not overwatered.

Although treatment is feasible, if symptoms manifest in sections of the plant above the soil surface, it may be too late to reverse the harm already done.